Over the last decade we have incorporated technology into our lives and our children’s and iPads have become a common tool for learning and playing. They are simple to use and allow students to create amazing final products that may reflect their learning, problem solving and communication skills. However, screen time, including all sorts of gaming, has its undesired effects on young bodies and minds.

In a recently issued set of guidelines prepared by a panel of experts, the World Health Organisation (WHO) has asked that children spend less time sitting in front of a screen, get better quality sleep and have more time for active play. According to the WHO, currently, over 23% of adults and 80% of adolescents are not sufficiently physically active. The recommendation is that children under 2 should have no screen time at all, and instead be stimulated by caregivers. For children between 2 and 4 years old, less than one hour a day is what’s best. This includes watching TV, using smartphones or tablets and playing computer and video games. As an educator, I would add that this hour must be closely supervised by an adult.

More time in front of the screen is less time kids spend connecting and engaging with their caregivers, friends and environment which are crucial for their social and emotional development. Our experience seems to confirm what the research indicates. I have attended a series of Professional Development sessions on the theme, led by the Education Experts at Apple and the information they shared was interesting and alarming.

It was explained how repetitive games provide children with frequent feedback and that can be extremely harmful. When that happens through points, noises, images, etc. their brains get quick shots of dopamine. This substance is known for being connected to motivation, which encourages the player to try again. Excessive users receive so many shots of dopamine, so frequently, that the impulsive part of the brain (amygdala-striatal system) becomes smaller (less receptors) and more sensitive, processing the stimuli faster and creating an addiction-like state, according to a series of studies by California State University. Though processing dopamine faster, these brains require more of it to have the same pleasurable effect.

The release of dopamine compels us to play, whether we want to or not. The release of dopamine every time the player wins or goes through the close-stakes experience of nearly losing motivates the player to keep trying, to take another chance. The Florey Institute of Health and Neuroscience says people who are addicted to gaming have fewer dopamine receptors in their brains, which is the same biochemical response as in drug addict’s brain.

As a consequence, once the iPads are gone, they don’t experience the same reward and enjoyment from everyday activities that children would have enjoyed in the past. They are unlikely to get the same levels of dopamine from a normal, everyday interaction. Teachers and caregivers won’t praise them with a funny sound or a point every 3 seconds. This leads to children being disinterested and bored with human interactions and very often anxious.

At Pioneer Village School we ensure iPads are tools not toys, and only used as means of creation. Our students do not get “free time” or “reward time” on iPads. Instead, they use them as a strategy to create based on what they have learned. They problem solve and communicate the complex content of their lessons and life experiences. No amount of technology can replace a well taught lesson, it’s all about balance. 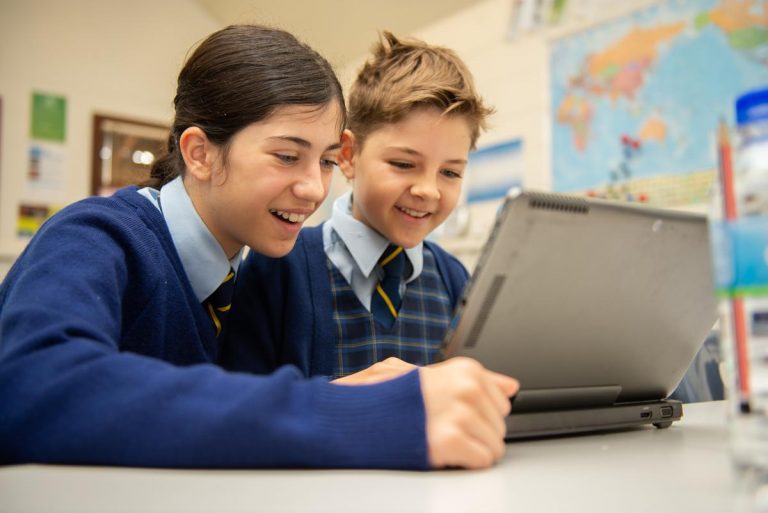 You’re welcome to tour our beautiful school with our Principal.